Current approaches to motion guidance with haptic feedback largely focus on correcting errors in position. Yet, for applications such as rehabilitation, there are advantages to adding velocity guidance. We developed an experimental platform designed to evaluate haptic feedback as a feasible modality for velocity guidance. This wearable platform consists of two vibration motors actuated via a microcontroller in response to changes in angular velocity of a user’s upper limb. The system produces vibrotactile stimuli with intensities dependent on the difference between the participant’s velocity and a prescribed velocity profile. The observations made through this analysis will enable future studies into the role of haptic feedback in velocity modulation. Coupled with existing work in trajectory guidance, this system holds the potential to enable more robust motion guidance. 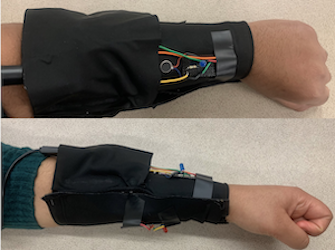